This paper presents insights from a leadership programme for women in academic positions in Computing Sciences with the goal of helping to advance their scientific careers. This is a joint programme between the Department of Computer and Information Science, and the Department of Telematics at Norwegian University of Science and Technology (NTNU).

It has long been recognized that more women need to be attracted to Computer Science (CS) programs globally [1]. However, overwhelming research evidence shows that the trend has taken the opposite direction. In 1984, 37% of Computer Science degrees in the U.S. were awarded to women and in 2014 the number dropped to 14 percent [2]. Currently in Norway, only 26% of professor positions are held by women [L1]. Gender balance in academic positions is a recognized goal in Norwegian society.

NTNU has been making systematic and successful efforts to increase female student recruitment (see article by Line Berg in this issue). Table 1 below lists the percentage of women in person years at the Faculty of Information Technology, Mathematics and Electrical Engineering (IME), and for the two departments in this program. There is a significant gap between the number of women in temporary and permanent academic positions. The leadership program will therefore focus on temporary staff to increase their awareness of the importance of strategic career planning and development.

Table 1: Person years for the Faculty and Departments: Source http://dbh.nsd.uib.no

The goals of our programme, which was launched in 2014, include: enhancing the leadership and strategic skills of the participants; encouraging women to participate more in networking in order to take a firm stand in scientific positions; and encouraging women to take top science and technology leadership positions and act as mentors to fellow women. Previous experience from other leadership training programmes is that such programmes are effective in empowering women to take leadership positions, and focusing on women already in an academic position within the fields of Telematics and Computer Science department represents a key opportunity (World Bank, 2012) that this program will seek to utilize.

The leadership programme involves professional training to be able to manage the gender biases that are embedded in the current system, and be more strategic in scientific career development and advancement. As an example, a training session with an organizational psychologist on "Leadership, gender, and culture” was organized this year. Another important focus is to strengthen internal and external networking. The programme therefore collaborates with other similar programmes locally and internationally and invites highly recognized international female scientists, such as Dr. Leila Alem from Australia and Prof. Gabriella Dodero from Italy, who gave inspirational talks and acted as mentors for our programme participants. 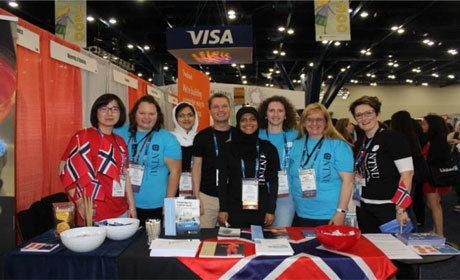 The programme has also participated in the Grace Hopper Conference (GHC) together with over 12,000 other female colleagues. NTNU’s goal was to attract prospective PhD students and Post Docs for our programs as well as to network with future colleagues. Attracting new female employees is tough with competition from high-profile companies such as Facebook and Google who emphasise their strong interest in hiring women in computer science positions.

As our programme is still at an early stage, it will be a while until the full benefit can be assessed. However, based on the feedback from the participants and interest shown by other CS units, the programme is on the right track. New CS units from NTNU will join the programme in 2016. The participants appreciate the extra effort that is put into supporting them in their career advancement. As an example, Kerstin Bach, one of the program participants, said that the programme had been an inspiration and helped her to reflect on where she stands in her career, and how she can support more women to aim at top leadership positions in the field of science.

The next step for the programme is to involve more men in order to increase awareness of the challenges raised, increase the attractiveness of PhD programmes in CS and Telematics, and to offer more mentoring support for women. However, to be able to continue, and extend the program, long term stable funding is needed. This has been a major challenge for similar projects, and there is a strong need to provide more funding opportunities for programmes with an aim of enhancing women’s advancement in their scientific careers [3]. Therefore, in order to improve the current situation and have a sustainable impact, further actions need to be taken and more gender balance programmes need to be adopted.

Please contact:
Letizia Jaccheri
NTNU, Norway
E-mail: This email address is being protected from spambots. You need JavaScript enabled to view it.