ACM President Alex Wolf welcomed the participants at the opening of ACM-W Europe womENcourage 2015 Celebration of Women in Computing by effectually pointing out: “We would not be here at all if there was not a problem in our community. I want to make sure that all of us understand that this is not a women’s problem! This is a community problem! And it takes everyone to solve this problem.”

Alex stated the obvious in his opening talk. This problem has been widely discussed, specifically, research shows that “Computer science as a discipline has not done well in attracting and retaining women and minority practitioners in any proportional scale to population representation: the percentage of BS degrees conferred to women peaked in 1986 and is still on a downturn.” [1] Confirming the point of the community problem: “While the gender issue is often perceived as a women’s issue, only when the majority of the deans and heads of European informatics departments see this as both a concern and an opportunity will there be any significant change.” [2] “More Women in ICT Research and Education” by IE-WIRE made recommendations that help administrators and deans with ideas and best practices so they can recruit, inspire and encourage their current and future employees and students. ACM-WE raises awareness among womENcourage attendees about these recommendations, which represent the minimal expectations of industry and academia.

Celebrations are effective in supporting women in tech careers, and research shows that even small “regional” celebrations are effective in inspiring women and giving them a sense of community [3]. ACM-WE survey results from womENcourage 2014 mirrored these results: 94% of respondents believed that their attendance at the Celebration of Women in Computing strengthened their commitment to their career. Additionally, an attendee at womENcourage 2015 stated she learned during one of the case studies “That no matter what issue appears during our career, there will always be a way to solve it and people who support women in STEM.” Being part of a community and knowing that there will always be someone there to offer support is very fortifying and helps individuals stay in their chosen field. ACM-WE knows that womENCourage celebrations provide a unique opportunity for students, young researchers and early practitioners to network and realise that they are not alone: there are others like them, they are “part of a technology community.” Therefore, ACM-W Europe and the entire ACM family work to bring inspiring speakers and panellists from across Europe and around the world to offer women both a sense of community and inspiration to increase their commitment to their career. 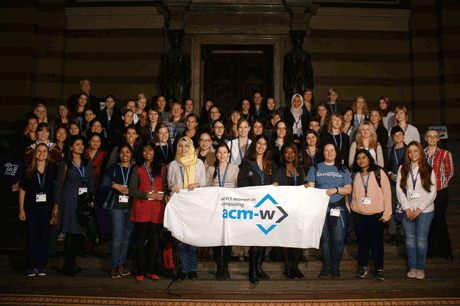 Keynotes are the most inspiring part of a celebration. The key learnings and exemplary presentation of accomplished computer scientists positively influences young students and practitioners [3]. WomENcourage 2015 attendees were fortunate to hear from Vicki Hanson, Asa Cajander and Marie-Paule Cani.

Vicki Hanson’s keynote address focused on her research, highlighting inclusive technologies. Researchers in the field of accessibility seek to create devices and software to address the needs of people who through age or disability, face exclusion from full societal participation. In creating accessible technology and novel accessibility tools, research has not only facilitated digital interactions and quality of life needs for many, but has also served to advance the field of computing more generally.

Åsa’s Cajander’s talk “On Grit and Being the Token Figure” brought up a range of challenges that most women in the audience have experienced. Åsa pointed out that many kinds of grit are needed for a woman to survive in her current environment, and she confirmed that women are not alone when faced with such circumstances. Asa said “Change comes slowly, but it is changing, we all need to continue to encourage these changes.”

Through examples and videos Marie-Paule explained why graphical design is essential for human creativity, including the fact that graphical simulation is difficult to control, and she described the new methodology which is emerging to ease the interactive design of complex shapes, objects and characters, possibly in motion.

WomENcourage 2015 hosted three panel discussions on Open Source as a Career Path, Teaching and Learning, Out of the Ordinary Jobs. Through the paper sessions students were given the opportunity to present and share their current research work and receive valuable feedback. The unconference sessions effectuated interesting discussions on subjects suggested by their participants who were also actively involved in the discussions: feminism in computing, women in computing: work-life balance, imposter syndrome, data mining, and learning analytics. “The workshops were brilliant, I really enjoyed the hands-on experience” were the words of one participant, echoing the sentiments of many. All workshops taught participants something new from basic electronics to creating wearables, to understanding open source code. The Hackathon had participants from 17 different countries. The winning teams’ projects were “Free Fall” (a device to attach to wrist or belt which alerts assistance if the person suddenly falls), “SafeHome” (a portable CO2 and gas alarm system), and “Be My Eyes” (a device that helps visually impaired people.)