by Constantin Brosda and Leif Oppermann

Complex physical phenomena, such as airstreams around objects and the resulting forces, can be very difficult to understand. Our Augmented Reality Supported Learning (ARL) app uses Augmented Reality (AR) to visualize the effects occurring upon a tangible object and to develop a set of experiments to be used in a learning environment.

Physics experiments, which often involve phenomena and concepts that are invisible, can sometimes be difficult to understand: for example, airstreams around objects and the resulting forces. We use Augmented Reality (AR) as an extended view on experiments to show additional information and thereby explain the phenomena while still allowing direct hands-on physical manipulation.

Previous EU projects, such as CONNECT and EXPLOAR, which were implemented at science centres, indicated that using AR in this way can be helpful for learners [1]. One major drawback of these science centers is they are only easily accessible for local schools. Why not, instead, bring the science centre into the classroom? Together with our pedagogical partners in the “Science Center To Go” EU project, we have created a suitcase prototype using a dedicated notebook [2] in which we present miniaturized versions of the exhibits. Powerful and widely spread smartphones now also allow us at Fraunhofer FIT to deploy such sophisticated applications on mobile devices using our Augmented Reality Supported Learning App (ARL). This allows us to reach a larger number of users and schools in which smartphones are more common than computers.

We had to use miniaturized versions of science centre exhibits in order to provide a quality of visualization of effects and phenomena that was equivalent to the real thing. We also needed to preserve the degrees of freedom in the interaction so as to avoid a rigid simulation. Therefore following the idea of tangible interfaces [3], the miniatures were printed with a 3D printer and equipped with markers for identification. The ARL App [L1] uses the camera stream to detect and calculate position and rotation of the objects and uses this information for the simulation. Based on the live data the virtual content is updated giving the users the impression of a seamless connection between real objects and virtual content.

One of the scenarios is the Bernoulli Effect, which tries to provide an answer to the question “Why do airplanes fly?” This exhibit consists of a model of a wing as shown in Figure 1. The wing is mounted on an axle to change its angle of attack. The air stream is visualized in the AR view. Forces of lift and drag are indicated through arrows at the wing model. The virtual content of the augmented view is instantly adapted for new angles of attack. Learners might change the airstream by changing the position of the fan as well as try out differently shaped wing models. This allows the user’s own hypothesis to be tested and the user to experience the Bernoulli Effect first hand. The information visualized in AR is intended to increase the user’s acceptance of otherwise more abstract content. 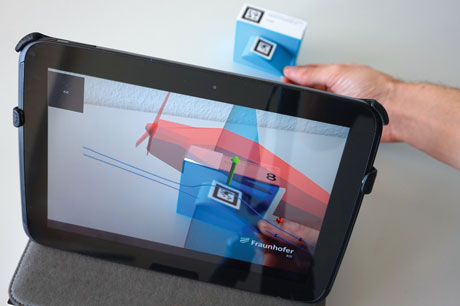 Another example is the Doppler Effect. The Doppler Effect exhibit allows users to move a sound source relative to a listener. The sound source is represented by a fire truck and its sound is captured by a virtual microphone. The user hears a change of pitch in the microphone input when either of the objects is moved. This miniaturized setup allows the simulation of the Doppler Effect, since, owing to the reduced scale, even small movements have a remarkable effect. Additionally visualized sound wave fronts further improve the understanding of wave propagation of relatively moving objects.

In the ongoing EU project Inspiring Science Education [L2] the ARL App featuring the Science Center To Go exhibits is currently used at schools in Europe. To lower the barrier of integrating interactive tools with the lessons, the ISE platform provides demonstrators for each tool. The teachers can then adapt and deploy their own interactive lesson.

In addition to the classical physical experiments outlined above, we - in cooperation with the ITA Institute of Textile Technology at RWTH Aachen - have also extended the ARL App to be used for mechanical engineering courses. This enables students to learn the mechanics of the machine in situ. By pointing a tablet towards the point of interest, the mechanics and gears become visible even while the machine is running.

We believe that the ARL App represents a further step towards turning concepts that have been developed and evaluated over years into reality for a broader group of users using smartphones and tablets, and helping students to understand and develop an interest in STEM (science, technology, engineering and mathematics) fields. The ongoing development of hardware will allow us to run more complex simulations bringing the virtual overlay and the real object even closer together to create a seamless augmented reality supported learning experience.