D-CENT (Decentralised Citizen ENgagement Technologies) is a research project developing digital tools for political autonomy, and aiming at the particular concrete cases of direct democracy and economic empowerment. As an alternative to closed and centralised internet platforms whose business models crucially rely on monetising the identity and social lives of their users, D-CENT aims to create a uniquely European open and decentralised approach aimed at empowering ordinary citizens to take action for the common good. Given the vision of Europe itself as a federation that crosses linguistic and cultural barriers, the D-CENT project hypothesizes that such an federated approach may be more successful in the long-term than trying to naïvely replicate Silicon Valley in Europe.

Part of the Collective Awareness Platforms effort since October 2012, the goal of the project is to build this alternatives by bringing together hackers, academics, and policy makers with a large number of activists throughout Europe to tackle pressing social and ecological problems [1]. Indeed, the project consortium, co-ordinated by the British innovation policy think-tank Nesta, brings together some of the most exciting democracy activists and researchers in Europe, including both Forum Virium in Finland, International Modern Media Institute and Citizen’s Foundation in Iceland, and the Open University of Catalunya and Barcelona Media in Spain, Open Knowledge Foundation and Thoughtworks in the United Kingdom, Centre d’economie de la Sorbonne (CNRS) and the World Wide Web Consortium (W3C)/ERCIM in France, and Dyne.org in the Netherlands.

The basic building blocks of D-CENT are open standards for a distributed identity management system that encourages autonomous control over social data. The foundation for this system is a privacy-aware OAuth-based system called “Stonecutter”. This system is designed to be easy for community groups to set-up and host, allowing users to authorize access to their data for use in various applications from an easy-to-use dashboard without resorting to centralized platforms [2]. With support of D-CENT, the World Wide Web Consortium launched the W3C Social Web Working Group in order to build the standards necessary to allow decentralised applications to be able to easily share extensible status-updates, called “activity streams.” Chaired by Tantek Çelik (Mozilla) from IndieWeb, Evan Prodromou (identi.ca and status.net), and Arnaud LeHors (IBM), the 46-person Working Group has already published a public Working Draft of the ActivityStreams 2.0 standard and in the future will produce a unified Social API. Tim Berners-Lee, the inventor of the Web and Director of W3C, has taken a personal interest and is currently focussed on his own design for re-decentralizing the Web called “CrossCloud.”

This open-infrastructure is meant to enable various decentralized applications for the common good. For example, today there are no applications that allow people to self-organise online and draft their own proposals for everything from policy documents even to legislation, and then vote on the results. Using a decentralized architecture in D-CENT, proposals will be able to start from the bottom-up and then be modified and applied across different contexts, ranging from neighborhood assemblies to cities to nations, even at the European level. Another line of research of D-CENT investigates the use of community currencies and the possibility of using a blockchain-based architecture to create a Bitcoin for the social good.

While these projects may seem wildly ambitious, D-CENT has already attracted interest from a number of digitally-savvy political parties ranging from Spain’s Podemos to the Icelandic Pirate Party – all of whom have seen spectacular leaps in popularity recently. D-CENT is committed to having its software open-source and available for any political party, government, or grassroots initiative. The stakes are high: Whether or not ordinary people can use these tools will spell the difference between a smart cities “controlled by a small elite group” or a “democratic city” based on a digital autonomy that allows meaningful political participation in the digital age [3]. 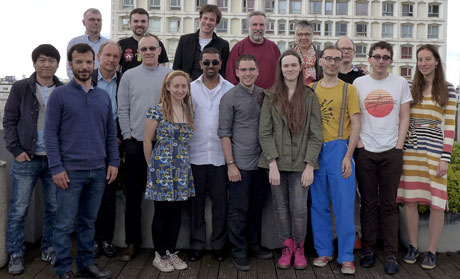 Please contact:
Harry Halpin, W3C
E-mail: This email address is being protected from spambots. You need JavaScript enabled to view it.