An interlocking system is an arrangement of signalling devices at track crossings or junctions that displays a stop signal unless the route is clear and safe, thus preventing conflicting movements of trains. The control table - a matrix composed of a row for each route and a column for each relevant track side device for that route [1] - rules the interlocking decisions process.

European railway standards are being established to facilitate interoperability and high speed trains. Loosely coupled systems – a consequence of different interlocking systems being used in different regions - lead to high maintenance costs, thus it is necessary to find a well-established shared configuration and operational system. Multiple solutions may be proposed to model a railway station, and the resources needed to validate and verify any solution or changes can be time-consuming and unaffordable for single teams.

To tackle this problem, we have developed a new approach based on a knowledge base (KB) system. The overall system architecture (shown in Figure 1) is composed of three parts: a KB model, an input station (signal principles, specific track elements field, and track layout), and device specifications (track device status and commands configuration). 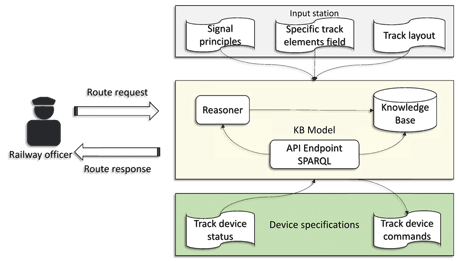 The KB model is based on an ontology which formalizes the relevant concepts of a track layout, e.g. track elements network and their related properties, such as train detector, signals etc.

To give an example, we could compile a station layout in the KB. Then, we could query the model to gain information about completeness and consistency of whole specification and of the elements adopted to configure the solution, exploiting routes or investigating which changes are needed to satisfy a specific interlocking principle, e.g. certifications. Using conventional procedures, the same actions would require considerably more effort, e.g. changing a safety rule means recompiling the entire control table including the related verification phases.

To build our ontology, we started by mapping the RailML infrastructure sub schema as a well-established domain of interest, identifying elements and their characteristics [2].
The RailML [2], an XML schema related to the railway domain, is composed of three subschemas: Infrastructure, Rolling Stock and Timetable. The infrastructure schema describes track positions according to nodes and branches modelling.

The initial prototype was unsatisfactory because the ontology was derived by simply mapping XML to OWL (Web Ontology Language) thus obtaining a taxonomy i.e. no significant inferences would be possible. Therefore, the early model has been enriched by using the OTN Open Transport Networks (OTN) for the topological aspects and Semantic Sensor Network (SSN) for modelling observations of events related to devices. OTN is a general purpose ontology oriented to transportation networks based on Graphic Data Format (GDF) which is a widely used binary data format for storing geographic data. The SSN ontology enables expressive representation of sensors, sensor observations, and knowledge of the environment. Despite the large coverage, the ontological model was not satisfactory and complete, thus other classes were added to improve the hierarchy of track elements, thus enabling inference and reasoning.

In order to validate the proposed ontology, data related to different railway stations formalized according to the rules of different countries (Netherlands, Germany and Italy) were loaded into the KB and tested.

The formalized semantics of our proposed approach have several advantages over state of the art formal specifications such as z-notation. For instance, they can be used to infer new facts (e.g. use of a specific track device) or to prove safety properties (by means of the execution of semantic queries checking several kinds of verification and validation properties for completeness and consistencies).

We chose OWL as the modelling language, and adopted Stardog as RDF-store and SPARQL end point for testing. Clark and Parsia’s RDF-store was chosen because of its reasoner that implements integrity constraint checking - an essential feature for validating track layout. Stardog was used because it enables a Close World Assumption for integrity constraints checking.

This activity was developed in the context of the RAISSS project partially supported by POR CReO FESR (European Fund for Regional Development) (2007 – 2013), and cofounded by the Tuscany Region, in collaboration with ECM S.p.A., a company producing solutions and technologies for the safety and control of railway infrastructures; and TESYSRAIL (national technological cluster on transportation 2020, technique and tool for railway transportation), supported the National Technological Cluster “Transport Italy 2020”. The work reported here was conducted at the DISIT Lab, Dept. of Information Engineering, Florence University. DIST is involved in the development of ontologies and knowledge bases for various smart city models and tools.