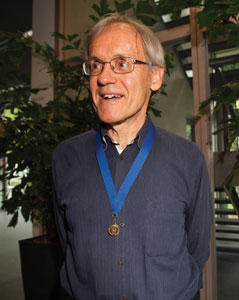 Researcher Lex Schrijver (CWI) has been awarded the EURO Gold Medal 2015. This prize is considered the highest European distinction in Operational Research (OR) and is awarded by the Association of European Operational Research Societies (EURO). Schrijver received the prize in July at the 27th European Conference on Operational Research in Glasgow. Schrijver is CWI Fellow in the Networks & Optimization group at CWI and professor at the University of Amsterdam. He is a world-renowned authority in the field of discrete mathematics and optimization. He is best known to the general public for his work on the optimization of the Dutch railway timetable. Schrijver has received numerous awards and honours, including the NWO Spinoza Prize, Fulkerson Prize (twice), Dantzig Prize, Frederick W. Lanchester Prize (twice), John von Neumann Theory Prize, and the Franz Edelman Award. He is Fellow of the American Mathematical Society and a SIAM Fellow, has honorary doctorates from the University of Waterloo and the Loránd Eötvös University and is a Knight in the Order of the Netherlands Lion.
Photo: Source CWI