Less than one year since its inception, the ECSEL (Electronic Components and Systems for European Leadership) Joint Undertaking (JU) is launching six research and innovation actions and six innovation actions arising from its 2014 calls, investing €708 million in electronic components and systems. The ECSEL JU is established by the European Council with the aim to keep “Europe at the forefront of technology development, bridging the gap between research and exploitation, strengthening innovation capabilities and creating economic and employment growth in the Union”.

Over the last five years, two organizations preceding ECSEL JU under FP7 (ENIAC and ARTEMIS JUs) pioneered a new type of project: “pilot line” or “innovation pilot” projects, positioned at higher technology readiness levels in order to bridge the “valley of death” separating the scientific discovery from its economic valorisation. Using open and competitive calls for proposals and a transparent evaluation and selection process, the JUs succeeded in concentrating investments on high priority, strategic topics. In fact, leading European companies engaged their ecosystems, assigned sizable research and innovation budgets, and used their best specialists in preparing convincing proposals that succeeded exclusively based on their merits. The JUs run a transparent evaluation and selection process performed by independent experts and public authorities.

The following examples illustrate two important areas (among others) in which a sequence of projects attracted significant private and public funding, commensurate with the global investments in the field, to advance the state of the art and generate industrial impact.

EPPL: Enhanced Power Pilot Line (April 2013- March 2016) is setting up a pilot line for high reliability devices of the next generations, and chip-to-package 3D integration to optimally serve industrial, medical and mobility applications.

ECSEL JU launches now a new Innovation Action taking these concepts to the next level:

The 130 participations from 12 countries engaged €270 million, and have been awarded €76 million national and €48 million EU grants to position
Europe as the leader in power electronics.

Electric mobility
European companies are world leaders in automotive innovation and sales. Together with their suppliers of electronic components and systems, they have proposed ambitious actions to establish leadership in electric mobility.

ECSEL JU is now launching a new research and innovation action, taking these concepts to the next level: 3CCAR: Integrated Components for Complexity Control in Affordable Electrified Cars (Apr 2015 – Apr 2018) shall introduce innovative approaches at all levels (vehicle architecture, sub-systems, components) to increase the affordability of the electric vehicles and accelerate their market penetration. 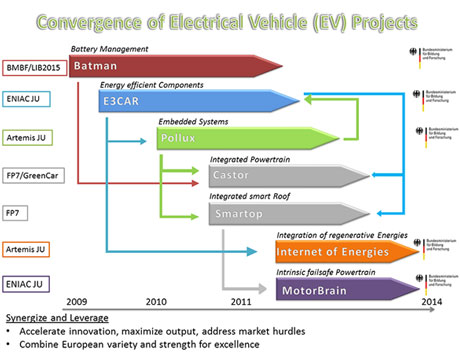 One hundred and fifty one participations from 16 countries engaged €175 million , and were awarded €49 million national and €37 million EU grants to defend Europe’s leading position in the global competition.

Conclusion
The ECSEL JU three-way funding model (private sector, Member States and EU) is proven as compelling. It succeeds in leveraging significant private and public investments and concentrating them on strategic priorities. The ECSEL JU offers a fertile collaborative environment for large and small companies, academic and institutional researchers from all around Europe, together developing and implementing high impact industrial strategies, which are beneficial for Europe in general.

Please contact:
Andreas Wild
Executive Director of the ECSEL Joint Undertaking
E-mail: This email address is being protected from spambots. You need JavaScript enabled to view it.