A prototype of the world’s first water-cooled 64-bit microserver, which is roughly the size of a smartphone, is part of the proposed IT roadmap for the Square Kilometer Array (SKA), an international consortium to build the world’s largest and most sensitive radio telescope.

When it goes live (by 2024), the Square Kilometer Array (SKA) will collect a deluge of radio signals from deep space. Every day thousands of antennas located in southern Africa and Australia will collectively gather 14 exabytes, and store one petabyte, of data. The SKA has been described as the ultimate Big Data challenge. To solve this unprecedented challenge, in 2012, ASTRON and IBM scientists launched ‘DOME’, an initial five-year, 35.9 million euro collaboration, named after the protective cover on telescopes and the famous Swiss mountain [1].

The 64-bit microserver uses a T4240 PowerPC based chip from Freescale Semiconductor running Linux Fedora and IBM DB2. At 139 × 55 mm2 the microserver contains all of the essential functions of today’s servers, which are four to ten times larger in size.

Figure 2: Cooling and power delivery for the microserver. The coolant flow can be seen on each side of the figure. 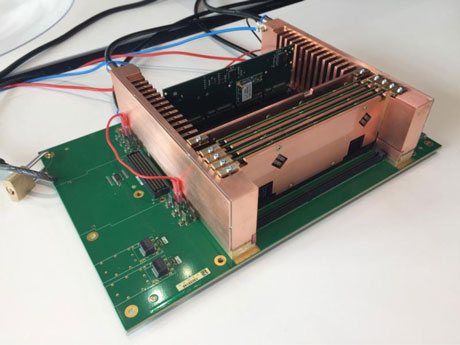 Figure 3: Microserver cluster demonstrator. Cooling water is delivered to the stack of cards via the manifolds on the left- and right-hand sides.

Not only is the microserver compact, it is also very energy-efficient. One of its innovations is hot-water cooling, which keeps the chip’s operating temperature below 85 Co. The copper plate used to transfer heat from the chips to the hot-water flow also transports electrical power by means of a copper plate. The concept is based on the same technology IBM developed for the SuperMUC supercomputer located outside of Munich, Germany[2]. IBM scientists hope to keep each microserver operating between 35–40 watts including the system on a chip (SOC) — the current design is 40 watts.

Details of the design of the microserver were presented at the 2015 IEEE International Solid-State Circuits Conference [3].