For the first time researchers could explain how lightning starts: by a combination of hail and high energy particles from space, originating from exploding stars. This mechanism is modelled by researchers from the Multiscale Dynamics research group at CWI, together with colleagues from the University of Groningen and the Vrije Universiteit Brussel. The research was partly funded by the Technology Foundation STW and the Foundation for Fundamental Research on Matter (FOM) . The article “Prediction of lightning inception by large ice particles and extensive air showers” is published on 30 June in Physical Review Letters. 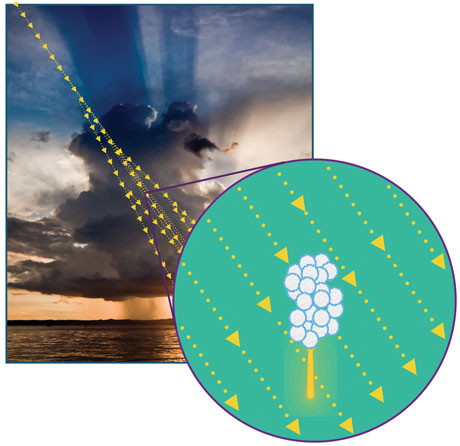 The start of lightning: a cosmic particle produces a particle shower, which generates free electrons. As soon as these electrons are available, a streamer discharge starts growing from a large hailstone, or an aggregate of graupel, where the electric field is amplified (Illustration: Casper Rutjes, CWI).

Ute Ebert (CWI and TU/e) says: “The start of lightning is highly complex because there are many processes unfolding at very different scales in space, time and energy. PhD students from my group, Anna Dubinova and Casper Rutjes, now calculated for the first time in detail how it works.” The main challenges were that the electric field in a thundercloud is too low to start lightning, and that there are not enough free electrons available to start a discharge. In the new model, there are hail stones that are large and sharp enough to form high electric fields around their points. In addition, a particle shower in the atmosphere, caused by one energetic cosmic particle, makes sure there are plenty of free electrons available for the formation of lightning. If the particle shower enters the high electric field of the hail point, a streamer discharge begins to grow and lightning starts.