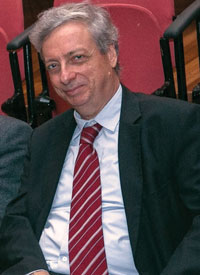 Prof. Christos Nikolaou passed away on April 30, 2015. Christos was a renowned researcher in the area of distributed systems and an enthusiastic teacher for more than three decades. He obtained a Ph.D. from Harvard University in 1982 and worked as a researcher and group leader at IBM T.J. Watson Research Center. He joined the faculty of the Department of Computer Science of the University of Crete in 1992 and served as Rector of the University from 1999 to 2004. During his term as Rector he implemented many innovative practices and reforms in the academic, administrative and student services domains. He undertook many initiatives that resulted in the ranking of the University of Crete in the top 100 young universities worldwide. Christos was also the head of the Pleiades Distributed Systems Group in the Institute of Computer Science of FORTH.

Christos was very active within the ERCIM Community. He served as the Chair of ERCIM’s Executive Committee from 1995 to 1998. He led and participated in ERCIM projects in the area of Digital Libraries and established collaboration with several ERCIM institutes. He will be remembered as a visionary researcher, inspired teacher and tireless worker. He will be greatly missed by his friends and colleagues. The ERCIM Community expresses its sincere condolences to his family.