The OpenWSN project is an open-source implementation of a fully standards-based protocol stack for capillary networks, rooted in the new IEEE802.15.4e Time Synchronized Channel Hopping standard. IEEE802.15.4e, coupled with Internet of Things standards, such as 6LoWPAN, 6TiSCH, RPL and CoAP, enables ultra-low-power and highly reliable mesh networks, which are fully integrated into the Internet. OpenMote is an open-hardware platform designed to facilitate the prototyping and technology adoption of IEEE802.15.4e TSCH networks, and is fully supported by OpenWSN.

Time Synchronized Channel Hopping (TSCH) was designed to allow IEEE802.15.4 devices (i.e., low power wireless mesh network devices) to support a wide range of applications including, but not limited to, industrial automation and process monitoring. It is based on a medium access technique which uses time synchronization to achieve ultra low-power operation and channel hopping to enable high reliability. Synchronization accuracy directly relates to power consumption, and can vary from microseconds to milliseconds, depending on the hardware and implementation.

The IEEE802.15.4e standard is the latest generation of ultra-low power reliable networking solutions for Low-Power and Lossy Networks (LLNs). The memo RFC5673 (Industrial Routing Requirements in Low-Power and Lossy Networks) (Link 2) discusses industrial applications, and highlights the harsh operating conditions as well as the stringent reliability, availability, and security requirements for an LLN to operate in an industrial environment. In these scenarios, vast deployment areas with large (metallic) equipment cause multi-path fading and interference to thwart any attempt of a single-channel solution to be reliable; the channel agility of TSCH is the key to its ultra high reliability.

IEEE802.15.4e TSCH focuses on the MAC layer only. This clean layering allows TSCH to fit under an IPv6-enabled protocol stack for LLNs, running IPv6 packet delivery in Low Power Wireless Personal Area Networks (6LoWPANs) (Link 3), IPv6 Routing Protocol for LLN (RPL) (Link 4) and the Constrained Application Protocol (CoAP) (Link 5). All of this complemented with the management interface and network operation specification currently being developed by the IETF 6TiSCH working group. 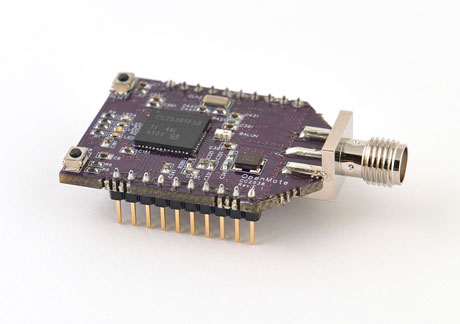 OpenWSN was founded in 2010 in the Berkeley Sensor & Actuator Center at UC Berkeley as an open-source project to implement, promote and contribute to the Industrial Internet of Things (IIoT), the next wave of innovation impacting the way the world connects. With a community of academic and industrial contributors, the OpenWSN protocol stack now runs on most popular low-power wireless platforms, and features a simulator and an ecosystem of cloud-based collaboration and continuous integration tools. OpenWSN has become the de-facto open-source implementation of IEEE802.15.4e-2012 Time Synchronized Channel Hopping (TSCH), the standard at the heart of the IIoT which enables ultra high reliability and low-power operation.

In 2013, work from the OpenWSN project contributed to the creation of IETF 6TiSCH (Link 7) Working Group, standardizing how to combine the ease-of-use of IPv6 with the performance of industrial low-power wireless technology. With over 290 members, IETF 6TiSCH is spearheading the development of the Industrial IoT.

In 2014, members of the OpenWSN team founded OpenMote (Link 8), a startup company developing an ecosystem of hardware for the IoT, including the popular OpenMote (see Figure 2), the OpenBase/OpenUSB board to program it, and the OpenBattery to power it. Inheriting from previous ‘Berkeley Motes’, the OpenMote is widely considered the new generation of low-power wireless experimental platforms. 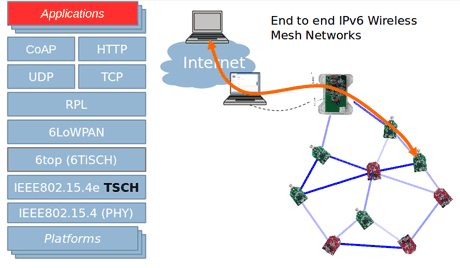 The OpenWSN ecosystem is devoted to accelerating the standardization and transfer of low power wireless technologies to the industry, enabling and promoting the adoption of low power wireless for industrial applications. OpenWSN is licensed under the BSD license; OpenMote Hardware is licensed under CERN OHL 1.2 hardware license. Both licences are neither viral nor restrictive, enabling industrial users to take advantage of the platform without jeopardizing their developments or intellectual property. OpenWSN is in constant evolution, being updated with the latest standards in the field and becoming a central prototyping platform for future amendments and improvements to already existing standards and protocols.

Please contact:
Thomas Watteyne
Inria, HiPERCOM2 team
E-mail: This email address is being protected from spambots. You need JavaScript enabled to view it.

Xavier Vilajosana
Universitat Oberta de Catalunya
E-mail: This email address is being protected from spambots. You need JavaScript enabled to view it.

Pere Tuset
OpenMote Technologies
E-mail: This email address is being protected from spambots. You need JavaScript enabled to view it.