by Vittorio Miori and Dario Russo

We present a practical and scalable solution that aims to achieve the Internet of Things (IoT) paradigm in complex contexts, such as the home automation market, in which problems are caused by the presence of proprietary and closed systems with no compatibility with Internet protocols.

Home automation is an appealing context for the Internet of Things (IoT). We envisage future home environments with self configured embedded sensors and actuators (e.g., in consumer electronic products and systems) that can be controlled remotely through the Internet, enabling a variety of monitoring and control applications. Manufacturers will produce their own IP gateways so that proprietary domotic systems can be interfaced with an IPv4 enabled Ethernet socket.

By connecting the IP gateway directly to the Internet or through a home/residential gateway, the domotic system can be managed remotely using a PC, Smartphone or Tablet (Figure 1). 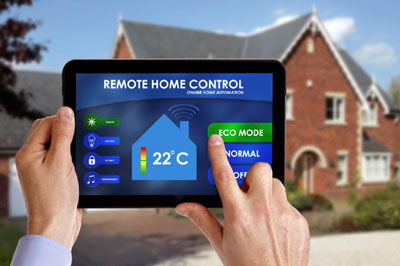 Unlike the IoT paradigm, a solution of this kind provides the home with a unique Internet access point (and a unique public IP address that can be assigned to the IP gateway or to the home/residential gateway in relation to the home network configuration) to control all the devices. In this scenario, the assigned public IP address does not identify a single device or function, but identifies the entire domotic network, and a customized software manager application able to locate devices and to activate their functions inside the domotic network is required.

One of the major problems in the home automation area is that different systems are neither interoperable nor interconnected. To tackle this issue, our laboratory has created a framework called DomoNet (Figure 2). 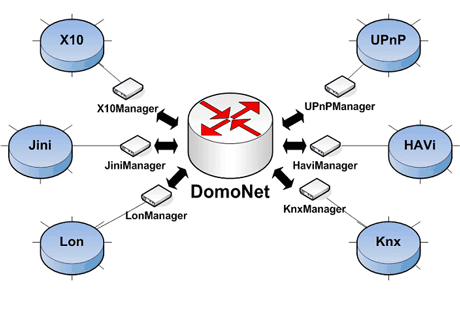 DomoNet [1] is an open source software released under the GPL license, following W3C recommended web standard technologies such as Web Services, SOA and XML. It constructs a unique view of the system that includes all the devices belonging to the different domotic systems available, through a set of modules that work as gateways. To implement interoperability, DomoNet defines a standard language, called DomoML, for the semantic abstraction of heterogeneous systems in order to describe device functions, data types, messages and models of the interactions and communications among framework entities.

By exploiting the DomoML language, DomoNet has a uniform view of all the devices and their relative functions available on its network. In this context, all the differences between domotic systems are flattened out so that DomoNet can interact with each device using only this single high-level language. To physically execute operations on devices, DomoNet implements special entities named TechManagers. TechManagers are gateways that, on the one hand, interface DomoNet and the DomoML language, and, on the other, manage events on the specific domotic bus.
A software module has been developed to enable any home automation device to interface and interact via the IPv6 [2] network protocol. All home automation devices can thereby interact actively with the surrounding world, through their own IPv6 address that identifies them uniquely on the Internet. The system thus increases the user’s ability to take full advantage of the benefits offered by the new IoT vision of the world. 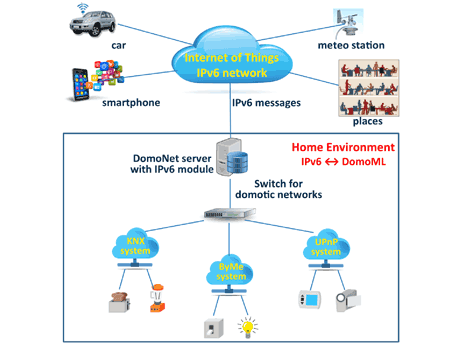 When a device signals its entrance into the DomoNet network (Figure 3), its associated TechManager creates the corresponding DomoDevice. The formal representation of the DomoDevice is sent to the DomoNet server, which assigns it both a DomoNet and an IPv6 address, thereby providing a dual identification. In doing so, the DomoNet server compiles a bi-directional map in order to enable identification of address correspondences. The provision of this dual representation ensures backward compatibility with the applications and services previously created for the DomoNet ecosystem.

We are working on the development of a web server running inside the same computer that hosts the DomoNet server, in order to simulate a direct web interaction with the device identified by its IPv6 address. The Tomcat web server was used in the test architecture.
A future development will be to decentralize the entire DomoNet architecture in order to create virtual independent devices that act as agents capable of cooperating with each other according to the Digital Ecosystem architecture paradigm [3]. This approach would further the realization of the concepts underlying the IoT paradigm and promote a new model for thinking about the environment surrounding us and the objects contained therein.