The Internet of Things (IoT) aims to interconnect large numbers of heterogeneous devices to provide advanced applications that can improve our quality of life. The efficient interconnectivity of IoT devices can be achieved with a hybrid Cloud Radio Access Network (Cloud-RAN) and Software Defined Radio (SDR) framework that can overcome the heterogeneity of devices by seamlessly adapting to their communication technology.

The Internet of Things (IoT) presents itself as a promising set of technologies that enable the efficient and seamless interconnectivity of large numbers of devices, allowing them to be discovered and accessed by the services in an abstracted way. The IoT is considered to be one of the key technologies for 5G communications and a basic technological enabler towards the realization of ‘Smart Cities’. Smart Cities is a relatively new term for a new generation of cities that use new technology to drive competitiveness, sustainability, economic growth, energy efficiency and improving Quality of Life (QoL).

The successful deployment of Smart Cities calls for a unified ICT infrastructure to support the diverse set of applications for urban development. Up until now, most of these devices used standard Wireless Sensor and Actuator Networking (WSAN) technology based on IEEE 802.15.4. Recently, however, the particular demands of IoT applications have prompted the adoption of more advanced communication technologies, e.g., IEEE 802.11 or 4G/LTE which are capable of providing a higher quality of service. A networking architecture capable of allowing the efficient and secure interworking of a large number of heterogeneous devices, avoiding the interference between them is a quite challenging research topic. One has to consider the differences between the various communication technologies and protocols, in terms of carrier frequency, bandwidth, modulation and coding schemes, packet structures, packet sizes, etc. For example, a smart phone with a 3G network access can only exchange information with a ZigBee sensor via a third device that translates all necessary protocols and sends back the sensed data.

Furthermore, when large numbers of IoT devices are deployed in urban environments where the ISM bands are already overcrowded the interference from external sources (other wireless networks) can severely impact network performance, since WSANs are very susceptible to other wireless transmissions. But how can we allow the devices to really ‘talk to each other’ (the basic motto of the IoT) without increased signalling in the network and long delays? How can we be sure that when an alarm is raised by an IoT device, this information will be prioritized and sent immediately to the respective target device without being lost due to collisions or interference?

A reliable architecture interconnecting heterogeneous IoT networks can be realized by integrating the benefits of Cloud-RAN [1] and Cognitive Radio [2] approaches. The Cloud-RAN architecture consists of (i) a cloud of centralized server units that manage a pool of base station resources, (ii) the distributed radio units (RUs) or SDR-based RUs (SRUs) that are located at remote sites and create wireless cells providing access to heterogeneous users and (iii) a high bandwidth low-latency link between the centralized unit and the remote sites. The advantage of this architecture compared with the standard C-RAN architectures that are proposed for LTE is the use of SDR-based radio units at remote sites that are able to handle simultaneous connections of various communication technologies. In this respect, only one SRU at each site has to be installed, avoiding the costs of installing multiple units for each communication technology. In such an architecture, the network management decisions (i.e., spectrum assignment, routing, scheduling, etc.) can be taken both locally at each SRU when they relate with the users on each cell or centrally by the centralized server units when interaction with the neighbour cells are required or for optimizing local decisions. An example of this architecture is shown in Figure 1, where the different colours of the SRU cells denote different communication technologies and frequencies. 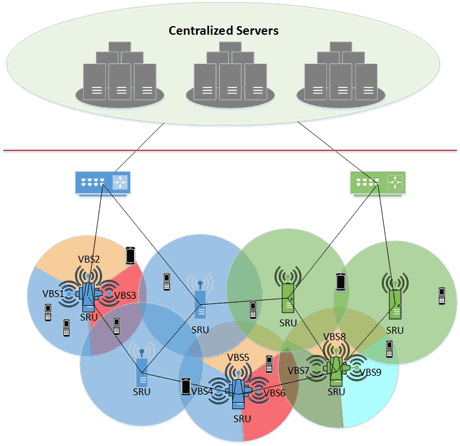 The software re-programmability of SRUs enables any updates regarding the communication protocols, installation of additional technologies, implementation of new networking standards, etc. to be done easily, saving significant costs associated with adding new hardware at each remote site. The ability of SDR to simultaneously handle different communication technologies can facilitate the virtualization of the remote units in a way that each unit will be seen as different Virtual Base Stations (VBS), each handling different communication technologies, e.g., VBS1 will handle IEEE 802.11, VBS2 will handle 3G, while VBS3 will handle IEEE 802.15.4 – based IoT devices.

The centralized server unit is able to perform an optimized management of the available network resources since it has a global view of the available resources at each SRU, and can reconfigure them easily at run-time to perform, for instance, traffic offloading when one unit is overloaded or to change frequencies when there is increased interference. The architecture can also easily adapt to non-uniform traffic via the load balancing capability of the distributed pool of base stations. This pool can also share signalling, traffic and channel occupancy information of the active users in order to optimize the radio resource management decisions. Spectral efficiency is improved via the cognitive radio mechanisms for intelligent management of spectrum resources that can be applied on the SRUs together with joint processing and scheduling.

This architecture can have many advantages for IoT, owing to its ability to optimize spectrum access for the multiple heterogeneous devices, prioritizing access to network resources according to the service request in both a centralized and a distributed manner. For example, if two devices are in the same area, even if they use different communication technologies, they will exchange their data directly through the local remote unit reducing unnecessary signalling. Another advantage is the cost-efficient deployment of such an architecture, which only requires centralized management and operation, while the installation of new remote units can be done with a simple SDR device and the required software. On the road to 5G, where IoT is a basic technological pillar, such an architecture could greatly help mitigate the heterogeneity of the involved devices and their efficient coexistence. Since the architecture is partly centralized, it can easily be integrated with existing IoT middleware platforms, playing the role of ‘communication manager’ - a functional entity proposed in many IoT architectures [3].

Please contact:
Elias Z. Tragos
FORTH-ICS, Greece
E-mail: This email address is being protected from spambots. You need JavaScript enabled to view it.