NFC tags and transceivers are ubiquitous and well supported. Like many academic research groups, the Communication Systems Group CSG of the University of Zürich owns many physical devices, which are required for research and teaching. Traditionally, a printed, human-readable inventory and attached labels have been used to keep track of these devices. A new inventory approach was developed with the aim of simplifying the data acquisition using an NFC tag-based system supported by an Android application. This approach was implemented, tested, and used productively. However, due to technical difficulties - namely, a poor response of NFC tags on metallic material - the NFC-based inventory system did not simplify data acquisition and consequently, the NFC-based inventory system was changed back to the label-based system.

Near Field Communication (NFC) defines a communication channel for devices in close proximity (up to 10 cm) [1]. NFC has a wide range of applications as it can be used to transmit data between devices or between a device and an NFC tag. These tags are standardized – though some differences exist – and the data is stored in the standardized format NDEF (NFC Data Exchange Format) [2]. Depending on the type of tag, data from 48 Bytes (Ultralight) to 888 Bytes (NTAG216) can be stored. The very popular tag NTAG203 and its successor NTAG213 can store 144 Bytes of data. Most Android-based smartphones are equipped with an NFC transceiver, and the software support for NFC has been present since the Android version 2.3, which was released in December 2010. Apple also integrated the NFC technology into iPhone 6 and bases its mobile payment system on this technology, although not providing an open API. Thus, NFC reading and writing capable devices are widespread and ubiquitous.

Inventory System
The label-based Communication Systems Group CSG [3] inventory system for hardware acquisitions above a certain commercial value used a human readable, four character and four digit label. The label had to be printed with a specialized label printer and was attached to the device. The four digit number was used to identify a database entry, which contained information, such as device name, vendor, purchase date, and current holder. Retrieving inventory information about a device involved manually entering its number into a Web browser.

To avoid not only the need for a specialized printer but to also allow every group member to conveniently retrieve and change inventory information, a new tag-based inventory system was envisioned. Barcodes, QR-codes, and RFID tags were evaluated to label items. Bar- and QR-codes were not followed up for two reasons: first, creating human-readable tags would again imply the need for a specialized label printer, which would prohibit “decentralized” tagging of devices. Second, once these tags are created, information they store is static. This was a major drawback, because the new inventory system has to be able to operate offline, i.e., even without a database connection retrieving or updating inventory information of a device in physical reach had to be possible. Therefore, change of information on a tag and its synchronization later with the database was essential. Consequently, RFID tags had to be used. Here, NFC tags qualified as the only option, as other RFID tags would require extra hardware for reading and writing tags. This would not only increase costs of the new approach but also reduce user convenience. Thus, since NFC is already supported by many smartphones and tablets, the NFC tags determined a valuable path.

Thus, the human readable inventory labels were replaced with NFC tags, to allow receipt and updating of inventory information upon scanning the tag with an NFC-enabled smartphone. To add a new device a database entry is created via the newly developed inventory smartphone app or via the inventory Web site. An NFC NTAG203 tag is placed on the device and an NFC-capable device used to store this entry’s identifier and other essential information in those tags 144 Byte storage. Updating entries is simple: an NFC tag is scanned with the inventory app and all available information about this item is displayed immediately. This information (including location, room, and holder) can be updated within the app, and written to the tag and the database. 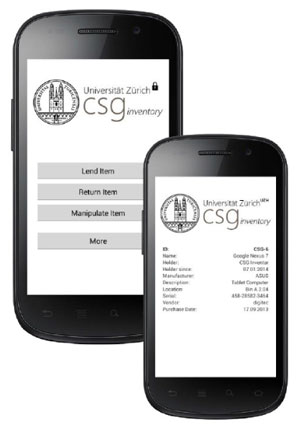 The smartphone inventory app was implemented in Java, while the backend was implemented in PHP communicating via HTTPS requests to the smartphone app. Authentication is done with LDAP, while all other data is stored in a MySQL database. Updating of device holders is the most frequently performed action, and the app’s starting screen (cf. Figure 1) offers two buttons for this purpose. Upon selecting ‘Lend item’, the name of the new item holder is requested. Once entered, an NFC chip can be scanned, which, like the according data base entry, is updated accordingly. The ‘Return’ button deletes the ‘current holder’ field of the subsequently scanned item (in the data base and on the NFC chip). ‘Manipulate item’ allows a database entry to be displayed and modified when the corresponding item is scanned. Thus, items can also be added or deleted here. With a ‘More’ click, additional information and a search function are displayed.

Evaluation
After the NFC-based inventory system was introduced, problems with using this approach in a practical environment soon became apparent. These problems were caused by the poor response of NFC tags, when any metal object was in their vicinity. As even some smartphones have metal cases, this resulted in a poor NFC communication reception. Thus, the evaluation recommends that smartphones with metal case are not used with an NFC-based inventory system. All following evaluations were performed with non-metallic smartphones.

Conclusions and Future Steps
Due to these problems with using the NFC system at metal objects, it was decided that an NFC tag-based approach was unacceptably unreliable, and the human-readable label system was reinstantiated. However, the smartphone app developed is still in use and determines a step forward in the entire inventory process, as it not only allows for an active identification of items – originally planned for by scanning their NFC tag –, but also allows for entering an identifier and all device-related information in a mobile manner, without the need for a Web-based inventory interface.