Smart Environments, and in particular Smart Homes, have recently attracted the attention of many researchers and industrial vendors. The proliferation of low-power sensing devices requires integration gateways hiding the complexity of heterogeneous technologies. We propose a ZigBee integration gateway to access and integrate low-power ZigBee devices.

Smart Environments, and in particular Smart Homes, have recently gained the attention of many researchers and hardware vendors. An increasing number of sensing devices, whose price is rapidly decreasing, are available on the market. Although such devices are becoming familiar in Smart Homes, user acceptance is limited by the fragmentation of the market. Heterogeneous technologies do not integrate seamlessly into a Smart Home; rather, each vendor offers its private vertical solution. ZigBee and OSGi play a predominant role in this scenario. ZigBee offers a service-oriented approach for low-power devices, with the unique feature of defining a variety of profiles that standardize the functionalities of several classes of device (e.g., home automation, health care, smart energy). OSGi offers a component-based execution platform facilitating the deployment and management of software units.

The Wireless Network Laboratory at ISTI-CNR funds the ZB4O project [1], ZigBee API for OSGi Service Platform. ZB4O faces the problem of providing an easy access to low-power sensing devices based on the ZigBee stack. It relies on the OSGi execution environment and it meets three basic requirements: (i) it provides a rich and flexible gateway for the ZigBee network, (ii) it extends the OSGi framework with an open mechanism to integrate ZigBee standard with a service-oriented approach and (iii) it defines an integration layer in order to access the ZigBee network by using other technologies.

ZB4O is designed by considering a typical use-case of Smart Homes. A new ZigBee device is installed at home, for instance a standard smart plug for monitoring energy consumption. A user can discover the ZigBee device as soon as it is plugged in, without the installation of any specific custom driver; rather, all ZigBee equipment is recognized and integrated autonomously. 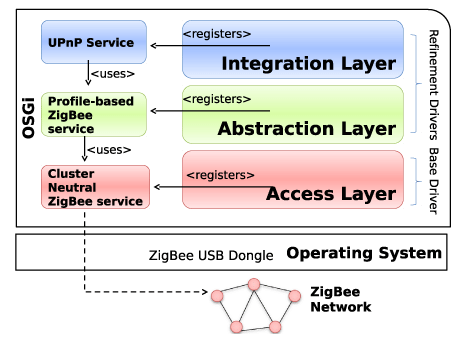 ZB4O is based on three layers, namely: the Access, Abstraction and Integration layers as shown in Figure 1. The Access layer directly communicates with the ZigBee network by means of a network adapter (for example, ZigBee USB dongle). The Access layer interacts with the network in order to detect new nodes, removal of nodes, and to detect relevant events concerning changes in the network topology. The Access layer is designed to be vendor independent. In fact, it does not constrain the end-user to adopt a specific ZigBee network adapter to interact with the network; rather the Access Layer implements a general-purpose solution. The Abstraction layer is designed with the goal of adding more functionalities to the nodes detected. In particular, this layer refines the nodes discovered by the Access Layer with a profile-based node. In this way ZB4O fully supports the profile approach followed by the ZigBee Alliance. The Integration layer exports the ZigBee functionalities to one or more target networks. Notable examples of exporters are the UPnP network, the REST paradigm or a successful experience of robotic ecologies such as the GiraffPlus robot [2]. 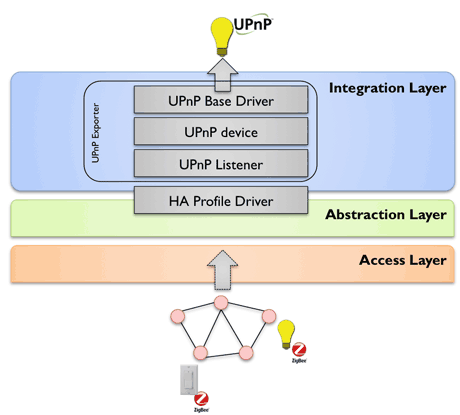 WNLab has developed an integration layer for two core enabling and widely accepted technologies: UPnP and REST as well as the integration with two EU projects: the universAAL project and the GiraffPlus project. In Figure 2 we show the integration layer for the UPnP network. The Access Layer recognizes an OnOff Binary Light device installed at home. The Abstraction layer refines the device by adding the functionalities defined by the Home Automation Profile. Finally the UPnP Integration Layer maps the OnOff Light as a UPnP Binary Light. In this way, an UPnP client can discover and interact with the ZigBee Light from the UPnP network.

ZB4O has attracted the attention of several ICT companies as well as several research centres. ZB4O is an active open-source project with a growing community of users and developers.