An earlier article in ERCIM News described a system for cooling integrated circuits with re-usable hot water. The result is a sharp increase in energy efficiency and a sharp reduction in the carbon footprint of data centers. The same technique is being applied to photovoltaic electrical energy production, again with a huge gain in system efficiency due to the parallel recovery of waste heat. In hot climates heat from datacenters as well as solar systems is converted into cooling by means of adsorption heat pumps.

The techniques described in the earlier article [1] involve using a network of microfluidic channels etched into the back side of the individual integrated circuit chips. The branched system is patterned after the cooling system of the mammalian brain that serves us all so well. Because water is so much more capable of heat transportation than air, the traditional air-conditioning system for a data center is unnecessary and the use of costly air-conditioning units and fans can be minimized. The integrated circuit chips are so designed that the “cooling” water can be so hot that the exiting hot water can be used for various purposes, heating a building or water desalination for examples, before being returned to the system for cooling. 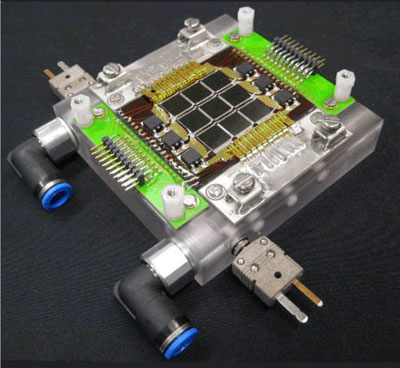 One of the systems using a water-cooling infrastructure with heat recovery is the supercomputer SuperMUC at the Leibniz Rechenzentrum in Garching, Germany. The system has a peak performance of three Petaflops. At the time of its installation in May, 2012, it was the fastest computer in Europe and ranked number four in the TOP500 list of the world's fastest computers. The system runs successfully and problem-free since then and is currently being expanded with new hardware to double its performance to 6 Petaflops. This phase II expansion will become operative in June 2015.

The microfluidic cooling innovation has now also been applied to specially designed photovoltaic chips. The overall efficiency of this new approach to conversion of sunlight to electrical power was so high in an experimental system that a commercial system is being developed. High-efficiency multi-junction photovoltaic cells reach efficiencies for photovoltaic energy conversion in excess of 40%, but the sun’s energy needs to be concentrated for their use to be cost-effective. This is being done through a system of parabolic mirrors which focus the solar energy more than 1500-fold on a dense array of multi-junction photovoltaic chips. At such concentration ratios, the heat flux at the photovoltaic cells is around 150 W/cm2, which calls for high-performance cooling to avoid failure of the cells. Relying on the microfluidic cooling approach developed for the thermal management of microprocessors, the photovoltaic cells can be safely operated under this extreme illumination and, at the same time, a large fraction of the incoming sunlight which is not converted to electricity can be captured as heat.

In the “Sunflower” implementation, 36 elliptic mirrors covering a 40 square-meter area achieve this focusing in a ten-meter high “sunflower”. The rated capacity of the system is 10 kW electrical power output at a solar-to-electrical efficiency of 25% and 22 kW thermal output at a solar-to-thermal efficiency of at least 55%. Overall this is an 80% usage of the sun’s energy. The hot water can be used to produce additional electrical power, heating (or even cooling) buildings or water desalination. In hot countries, the demand for heating is dwarfed by the demand for cooling. In the Middle East, for example, 90% of all electricity is consumed for air-conditioning in the summer months. The thermal output of the Sunflower system can be used to provide valuable cooling by means of thermally driven heat pumps, such as adsorption or absorption chillers [3]. The ability to drive a refrigeration cycle using heat from the concentrated photovoltaic system is a key value proposition in hot climates. 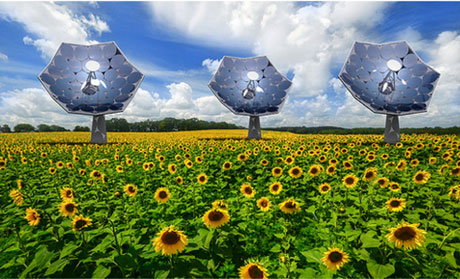 In fact, thermally driven heat pumps represent a promising technology to utilize even low-grade heat in scenarios where there is little or no demand for heating. Hot-water cooled datacenters in warm climates, for example, are still more efficient than their air-cooled counterparts due to the minimization in air-conditioning and air-handling infrastructure. However, the recovered heat does not provide an added value and needs to be discarded. On the other hand, there is a continuous demand for cooling of power supplies, storage servers and other non-water-cooled datacenter infrastructure. Therefore, thermally driven heat pumps offer a solution to utilize low-grade heat recovered from hot-water cooled servers in order to provide the cooling for other air-cooled datacenter components. In this scenario, heat recovery combined with sorption cooling technology therefore enables further improvements in datacenter efficiency even in hot climates.

The synergies between the thermal management of servers and photovoltaic cells have led to the definition of high-efficiency systems in the fields of datacenters and energy generation. The design of the photovoltaic receiver modules with integrated cooling was done at the IBM Zurich Research Lab and the overall Sunflower is being built by a new company, Dsolar. Dsolar is part of Airlight Energy which specializes in solar power technology. Their contribution is an inexpensive implementation of the array of mirrors in each of which a reflecting plastic film is shaped by a pressure difference in a lightweight concrete casing. The sunflower has a tracking mechanism to follow the path of the sun in the course of a day. The innovative implementation is inexpensive to the point where the hope is that the power generation will be two or three times less expensive than standard technology.