Over the last 25 years, ERCIM has earned a reputation as one of Europe’s leading expert groups in the areas of ICT and Applied Mathematics. In 2012, the ERCIM community was restructured and is now supported by two organizations, the ERCIM Association (AISBL) and the ERCIM European Economic Interest Group (EEIG). While the Association is carrying out and supervising all of ERCIM’s scientific activities, the EEIG, composed of a subset of the Association's members, is responsible for managing the ERCIM Office and the European branch of the World Wide Web Consortium (W3C).

The ERCIM Office, hosted by Inria in its Sophia Antipolis Research Centre in Southern France, manages all administrative and financial aspects of the ERCIM community with a talented team of professionals.

Hosting and managing the European branch of W3C is a major task of the ERCIM EEIG. The change of the W3C European host from Inria to ERCIM in 2003 aimed at strengthening research relationships throughout Europe to better support Web technology development. ERCIM was a natural candidate as host since many of the European W3C Offices were already based at ERCIM member institutes. When Inria became the first W3C European host in 1995, W3C Europe had 50 members in four countries. Today, the W3C Membership in Europe exceeds 140 organizations, with representation in 20 countries in Europe. But more important, during the last twenty years we have witnessed the Web revolution with tremendous advances in Web technology, changing not only the world of research but also the whole of society. The evolution of Web standards is a challenging task, yet is crucial to maintain an open Web and to transform W3C into a more long-term international standardization organization. This year, W3C Europe will celebrate its twentieth anniversary at an event on Tuesday, 5 May in Paris, in conjunction with the ERCIM Spring meetings, and ERCIM representatives are cordially invited.

The ERCIM Office is also providing assistance and services to the whole ERCIM community. An important activity is the management of European projects involving ERCIM members or the W3C. Through ERCIM, our members have participated in more than 80 projects funded by the European Commission by carrying out joint research activities while the Office manages the complexity of the project administration, finances and outreach. The ERCIM Office also handles ERCIM AISBL financial matters and supports the whole ERCIM community in administrative tasks such as the management of the well established ERCIM Fellowship Programme, and in communications, for example by hosting and maintaining web sites and by producing ERCIM News.

ERCIM has gained a leadership position for cooperating for excellence in research and is a recognized expert organization in Information and Communication Technologies in Europe. To maintain its position, and increase its impact on European strategy and policy, I’m convinced that ERCIM has to increase its membership by attracting the best research performing organizations and by developing new strategically important activities such as the “ERCIM white papers series” started last year with support of Domenico Laforenza, my fellow president of ERCIM AISBL. ERCIM groups of experts identify emerging grand challenges and strategic research topics in Information and Communication Science and Technology (ICST). In 2014, the first two white papers were published on the topics “Big Data Analytics” and “Cyber-Security and Privacy” with recommendations for future research. A white paper on Massively Open Online Courses (MOOCs), another current hot topic, is currently in work.

I also support Domenico’s efforts in cooperating with leading European organisations, in order to play a role in shaping Europe’s digital future through the platform of the European Societies in Information and Communication Sciences and Technologies (EFICST). I encourage ERCIM to strengthen relationships with organisations such as Informatics Europe and the ICT Lab, a Knowledge and Innovation Communities (KICs) of the European Institute for Innovation and Technology (EIT).

With our two organisations, ERCIM EEIG and ERCIM AISBL, I believe that we have the potential to strengthen our position as recognized leader in field of European research and innovation in ICST, to increase our impact on European strategy and policy, and to successfully continue our mission of “Cooperating for Excellence in Research”. 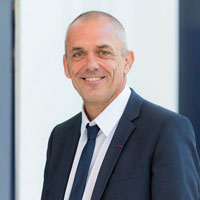 Antoine Petit, Chairman and CEO of Inria, was nominated President of ERCIM EEIG by the ERCIM EEIG Board of Directors on 24 October 2014 in Pisa for a two year term from January 2015 to December 2016. Antoine Petit succeeds Michel Cosnard, who took office as ERCIM President in January 2011. Photo © Inria / C. Helsly