In February an interview with Guido van Rossum was published on the ACM website, celebrating 25 years of Python. This popular programming language originates from CWI in Amsterdam, where Van Rossum designed Python in December 1989 and finished the first working version in the first months of 1990. He named the language after his favourite British comedy series Monty Python's Flying Circus. 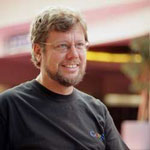 Science journalist Bennie Mols, author of the ACM article, writes: “For many years, Python has appeared on the list of the ten most-utilized computer languages in the world. Companies like Dropbox, Google, Mozilla, and Walt Disney Animation Studios are large users of Python, as are banks, universities and institutions such as NASA and CERN.” On Python’s success Van Rossum told Mols: “Python is easy to learn and easy to use. It’s also a great tool for scientists who work interactively with data. Python has been available according to the open source philosophy, even before the term ‘open source’ was invented. Python users feel part of a community and are very active in making improvements.”