The rapid emergence of mobile devices, such as TabletPC and smartphones, equipped with a rich array of sensors, enables a new means of acquiring sensor data, known as crowd-sensing. Crowd-sensing is currently receiving a lot of attention, not only from industry but also from various research communities interested in collecting a new class of data over a much larger population than was previously possible.

“Crowd-sensing” refers to the involvement of a large, diffuse group of participants in the task of retrieving reliable data from the field. This approach has been used in multiple research studies, including traffic and road monitoring, social networking and environmental monitoring.

However, developing a dedicated sensing application to collect a specific dataset over a target population presents a real challenge [1]. Indeed, when building an efficient application involving a large community of participants, a number of vital issues must be taken into account, including incentive mechanisms, recruitment models, energy limitations and privacy concerns. A thorough expertise in the area of mobiles device technology is essential to address these issues. Consequently, it can be difficult for scientists, inexpert in this field, to collect realistic datasets for their studies. But more importantly, the ad hoc applications that are developed may neglect privacy and security concerns, resulting in the disclosure of sensitive user information, or even the adoption of unethical or illegal approaches.

The state-of-the-art therefore lacks reusable solutions for safely collecting and exploiting crowd activity traces, which are usually difficult to set up and are tied to specific data representations and device configurations.

In this context, the Inria ADAM project team has developed APISENSE [2], a platform targeting multiple research communities, and providing a lightweight solution to build and deploy crowd-sensing applications for collecting experimental datasets.

The APISENSE Platform
The APISENSE platform distinguishes between two roles. The first, called scientist, is typically a researcher who wants to define and deploy an experiment over a large population of mobile users. The platform therefore provides an online environment (as a software as a service) allowing the researcher to describe experimental requirements via a scripting language, to deploy the experiment scripts over a subset of participants and to connect other services to the platform in order to extract and process the collected datasets (eg, visualization, analysis, replay). Technically, the server-side infrastructure of APISENSE is built on the principles of Cloud computing in order to offer a modular service-oriented architecture, which can be customized to suit the scientist’s requirements. The second role is the mobile phone user, identified as a participant. The APISENSE platform provides the participant with a mobile application allowing experiments to be downloaded and executed in a dedicated sandbox, and the collected datasets to be automatically uploaded on the APISENSE server.

The APISENSE Language
To facilitate its adoption by scientists, APISENSE adopts standard scripting languages and provides an extension of the JavaScript, CoffeeScript and Python languages, as an efficient means of describing an experiment without any specific knowledge of mobile device programming models (eg, Android SDK).

Figure 1 shows how simple it is to define a sensing task to collect a specific dataset in the wild and automatically build an open data map from collected data. The sensing task is defined using CoffeeScript language, which is triggered whenever the location of a participant changes by a distance of 10 m in a period of five minutes. When these conditions are met, the script automatically builds a trace containing the location of the participant and attaches GSM networks characteristics. The sensing task can be defined by the scientist using a web interface and a single click makes it available to participants. Figure 2 depicts the resulting open map generated from datasets collected by only three participants and displaying the GSM signal strength of a given network operator in the area of the University Lille 1. 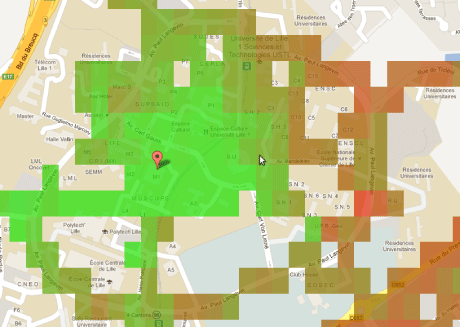 Ongoing Work
Our current work focuses on the deployment of various large scale sensing experiments for building a collaborative method i) to identify Android malware in the wild and ii) to deploy micro-seismic mobile stations for earthquake monitoring.

Additionally, APISENSE collaborates with the MetroScope initiative, supported by Inria, to provide a new generation of instruments for observing Internet usage. By providing tools, datasets, and analyses that make sense for different disciplines, APISENSE not only contributes to the theoretical knowledge of the Internet, but also introduces a greater level of transparency by involving citizens and giving them direct feedback.


{jcomments on}
Next issue: July 2021
Special theme:
"Privacy-Preserving Computation"
Call for the next issue