Air pollution is one of the most serious causes of degradation in bronze monuments and artifacts; in particular, sulphur dioxide (SO2) is one of the main causes of bronze disease. Mathematicians have now begun to model this kind of problem in order to assist the protection and restoration of bronze artifacts. In our research, we have introduced a free boundary model which describes the growth of corrosion on the surface of bronze monuments under SO2 aggression, quantifying the influence of different environmental factors such as concentration of pollutants, but also humidity and temperature.

Deterioration of bronze (monuments and artifacts) is a complex problem and one of the main concerns for people working in the field of conservation and restoration of Cultural Heritage. It is extremely difficult to isolate a single factor in these processes, which are the result of the interaction between various mechanisms, many of which also occur in natural weathering. Atmospheric pollution, however, can certainly be considered as one of the key contributing factors. Despite the reduction in air pollution in European urban areas that has occurred in recent years, there is still a harmful concentration of pollutants, such as sulphur dioxide (SO2), which negatively affects the conservation of bronze.

SO2 can react with copper, producing several products of corrosion, in particular brochantite (Cu4(OH)6SO4), a common copper hydroxide sulphate. This process greatly depends on the nature of the copper sample and on the presence of moisture. The condensation of moisture may depend on the structure of the material, and is critical to its reactivity to pollutants.

Within this complex framework, mathematical modelling may be useful, simultaneously providing both quantitative information and simulations of the various processes involved. Using the basic laws of electro-chemistry, models can take into account environmental conditions and their variations (air pressure, temperature, moisture, rainfall, and concentrations of pollutants) and can be used as additional tools in determining optimal strategies of intervention.

At the Istituto per le Applicazioni del Calcolo "M. Picone" (IAC – CNR) in Rome, we are currently investigating this modelling approach, and we have proposed a differential model with two free boundaries describing the evolution of corrosion products of bronze, a copper tin alloy (88-12%).

This model includes important features such as swelling of the products of corrosion, which depends on the structure of the matter, and the total wasting of bronze. For simplicity, as a first step, we have considered only copper corrosion product development. To describe copper corrosion evolution, we consider, on the most internal layer, the transformation of copper in cuprite by oxidation, which involves the transformation of two moles of copper in one mole of cuprite (Cu2O), accompanied by a volume change caused by the changed molar volume. The cuprite external layer reacts with SO2 in the presence of water and oxygen, thus for every mole of brochantite that is formed, two moles of cuprite and one mole of SO2 are required. Swelling is expected also in this case, see Figure 1. 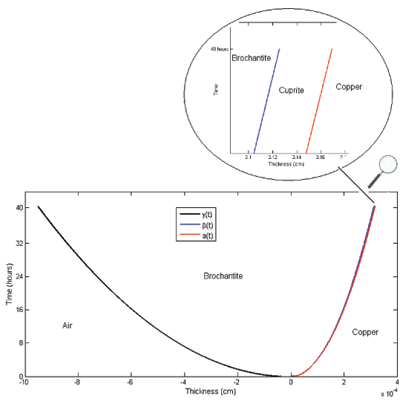 Figure 1: Formation of cuprite and brochantite layers over the copper boundary.

To calibrate this model, in collaboration with the Chemistry Department of the University Roma “La Sapienza”, specific laboratory experiments have been performed, in a climatic chamber and atmosphere control (Erichsen Mod. 519/AUTO), with 40o Celsius of temperature, 100% of Relative Humidity, and 200 ppm of SO2. Under these conditions, the growth of corrosion products (cuprite and brochantite) after 40 hours was about 13.2μm, with a standard deviation of 2.4μm. The model was thus calibrated using these results. In addition, using environmental data (SO2, temperature, pressure and humidity) collected in Piazzale Fermi in Rome (Italy) during 2005, a simulation was performed to assess the formation of corrosion products under these conditions. The simulation with Piazzale Fermi data is shown in Figure 2. It must be observed that a greater cuprite thickness is due to the model calibration which is obtained under high Relative Humidity and a very high SO2 concentration; environmental conditions have a lower concentration of SO2 and a variable Relative Humidity. 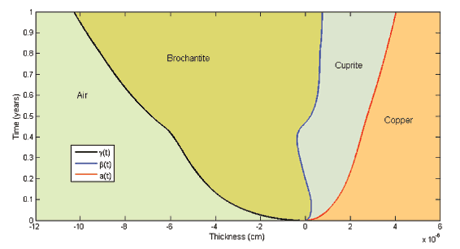 In the future, our aim is to develop standard predictive software based on our model, as an aid for monitoring outdoor and indoor monuments.