by Dirk Helbing and Stefan Lämmer

Adaptive techniques can modernize traffic control, saving fuel, reducing travel times and emissions, and doing it all without limiting drivers’ mobility. This approach promises to save driving time and benefit the environment at the same time.

Currently, traffic jams and road congestion do a lot more than annoy millions of people every day. In the United States alone, delays linked to backed-up traffic cost nearly $100 billion each year, and waste more than 10 billion litres of fuel, not to mention countless human hours. Additionally, CO2 and other pollutants are spewed into the atmosphere from traffic stalled in jams. 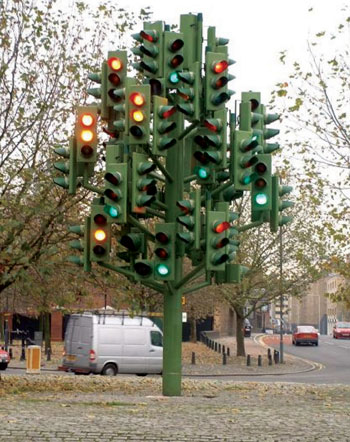 A ‘special’ traffic light in London.

The new approach is based on giving traffic lights some simple traffic-responsive operating rules and letting the lights organise their own on-off schedules. Traffic is modelled as if it were a fluid, where traffic leaving one road has to enter another, like fluid moving through a network of pipes.

Jams can arise, obviously, if traffic entering a road overloads its capacity. To avoid this, each set of lights is given sensors that feed information about the traffic conditions at a given moment into a computer chip, which then calculates the flow of vehicles expected in the near future. The chip also calculates how long the lights should stay green in order to clear the road and thereby relieve the pressure. In this way, each set of lights can estimate for itself how best to adapt to the conditions expected at the next moment.

Simulations showed, however, that this simple rule isn’t enough: the lights sometimes adapt too much. If they are only adapting to conditions locally, they might stay green for too long and cause trouble further away. The algorithm has been modified so that what happens at one set of traffic lights affects how the others respond. By working together and monitoring the lengths of queues along a stretch of road, the self-organised lights prevent long jams from forming.

Despite the simplicity of the rules, they seem to work remarkably well. Computer simulations demonstrate that lights operating this way would achieve a significant reduction in overall travel times and keep no one waiting at a light too long. One of the biggest surprises, however, is that all this improvement comes with the lights going on and off in an unpredictable way, not following a regular pattern as one might expect.

The adaptive control does not fight the natural fluctuations in the traffic flow by trying to impose a specified flow rhythm. Rather, it uses randomly appearing gaps in the flow to serve other traffic streams. According to simulations, the algorithm can reduce average delay times by 10%–30%. The variation in travel times goes down as well. Being responsive to local demands, when the traffic flow is low, an approaching car can be sensed and the light changes to green to let it through.

We are working with a German traffic agency to implement the idea. In tests based on Dresden’s road layout, simulation results for realistic, measured traffic flow conditions have been very encouraging. The simulations show significant reductions in waiting times and fuel consumption.

Similar problems arise in many other systems including complex manufacturing plants, the supply chains of large organizations, the electricity grid, or the administrations of organizations. These will be studied in a large-scale techno-socio-economic research project called FuturICT.

Please contact:
Dirk Helbing
ETH Zurich, Switzerland
E-mail: This email address is being protected from spambots. You need JavaScript enabled to view it.

Stefan Lämmer
TU Dresden, Germany
E-mail: This email address is being protected from spambots. You need JavaScript enabled to view it.