by Fabrício A. B. da Silva, Mário J. Silva and Francisco M. Couto

The Epidemic Marketplace is a distributed data management platform where epidemiological data can be stored, managed and made available to the scientific community. The Epidemic Marketplace is part of a computational framework for organising and distributing data for epidemic modelling and forecasting, dubbed Epiwork. The platform will assist epidemiologists and public health scientists in sharing and exchanging data.

The Epidemic Marketplace is an e-Science platform for collecting, storing, managing and providing epidemic semantically annotated data collections. In recent years, the availability of a huge volume of quantitative social, demographic and behavioural data has spurred an interest in the potential of innovative technologies to improve disease surveillance systems, by providing faster and better geo-referenced outbreak detection capabilities. These capabilities depend on the availability of finely-tuned models, which require accurate and comprehensive data. However, the increasing amount of data introduces the problem of data integration and management. New solutions are needed to ensure that data are correctly stored, managed and made available to the scientific community.

The Epidemic Marketplace is part of a European research effort, the Epiwork project, a four-year project started in 2009. Epiwork supports multidisciplinary research aimed at developing the appropriate framework of tools and knowledge needed for the design of epidemic forecast infrastructures, to be used by epidemiologists and public health scientists. The project is a truly interdisciplinary effort, anchored to the research questions and needs of epidemiology research by the participation of epidemiologists, public health specialists, mathematical biologists and computer scientists. The Epidemic Marketplace is the Epiwork data integration platform, where epidemiological data can be stored, managed and made available to investigators, thus fostering collaboration. The objectives of Epiwork in which the Epidemic Marketplace will play a direct role: (1) the development of large scale, data driven computational models endowed with a high level of realism and aimed at epidemic scenario forecast; (2) the design and implementation of original data-collection schemes motivated by identified modelling needs, such as the collection of real-time disease incidence. This is achieved with the use of innovative Internet and ICT applications; (3) the set up of a computational platform for epidemic research and data sharing that will generate important synergies between research communities and states.

The main non-functional requirements that have been identified for the Epidemic Marketplace are: 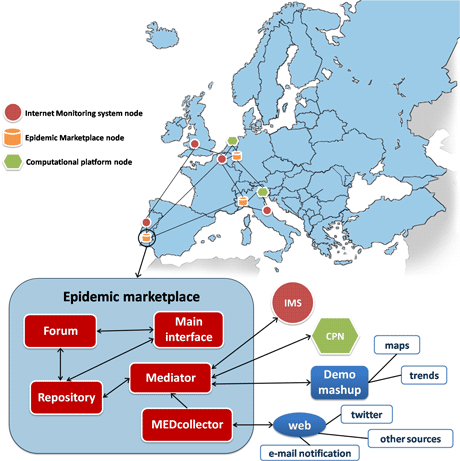 Figure 1: An envisioned deployment of the Epidemic Marketplace distributed among several locations. Currently, only the Lisbon node has been deployed. Each Epidemic Marketplace node is composed of four modules: repository, MEDcollector, forum and mediator. The mediator will be the contact point for other applications, such as Internet Monitoring System nodes (eg Gripenet), and for clients that show data in a graphical and interactive way using geographical maps and trend graphs.

As shown in Figure 1, each Epidemic Marketplace node has the following modules:

A first prototype version of the Epidemic Marketplace is already in use internally. This prototype implements several of the main features of the outlined architecture such as data management and sharing support and secure access to data, and is currently being populated with epidemic data collections. Several open-source tools and open standards are being used in the Epidemic Marketplace implementation and deployment process, such as the Fedora Commons for the implementation of the main features of the repository. Access control in the platform uses the XACML, LDAP and Shibolleth standards. The front-end of this first prototype is based in Muradora, but the next version will also include a front-end based in the Drupal content management system.

The Epiwork project is funded by the European Commission under the Seventh Framework Programme. The authors want to thank the Epiwork project partners, the students that have been working in the initial implementation of the Epidemic Marketplace (Luis Filipe Lopes, Patricia Sousa, Hugo Ferreira and João Zamite), the CMU-Portugal partnership and FCT (Portuguese research funding agency) for its support.